Producer and Curator Vicki Gordon broke new ground when Barefoot Divas premiered to sold out houses, receiving standing ovations for every single performance as part of the Sydney Festival and the New Zealand International Arts Festival in 2012. As the critics noted; bringing together these unique and talented Women from Aotearoa, Australia and Papua New Guinea in a contemporary, not a folkloric, production will, again, break new ground by showcasing these authentic, contemporary and poignant performers to new audiences in America.

Opening at the top of the U.S presenting field, the Zellerbach Auditorium in Berkeley is a leader and taste-maker in the country, renowned for consistently presenting major artists from around the world and home to Sweet Honey in the Rock and Lady Black Smith Mambazo. The tour then takes in the Leeward Community College Pearl City Hawaii, Banff Centre in Canada culminating in a special Valentine’s Day concert in the Town Hall Seattle. Consistent with their philosophy and mission, Barefoot Divas will also engage with disadvantaged communities, youth and young women, in addition to their performance, and look forward to making special connections with First Nations people from across the country.

After receiving 2 standing ovations in Melbourne and their best critical review to date, Barefoot Divas received 4 standing ovations at the Mullum Music Festival before returning to the stage to perform an extended encore. Audiences outside the venue chanted Divas, Divas, Divas and literally stampeded the Civic Hall to secure a seat in the venue!

Solidarity doesn’t need to raise its voice. Forming an imposing line across the lip of the stage, Barefoot Divas identified themselves quietly in turn – name and heritage in proud languages from Arnhem Land to Aotearoa – and shared a hushed incantation beginning ”My feet have carried me”.

Fame rhymed with pain; red earth with giving birth. ”My ankles wobbled in times of loss/ I’ve learned to be my only boss.” The repeated refrain was ”Long way.”

Sisters who knew that road were hollering affirmations from the dark even before willowy Maori soul singer Maisey Rika hit the first long, ululating note of this year’s Australasian Worldwide Music Expo.

Common ground poetically established, the power of the six indigenous performers turned out to be more about individual radiance than harmony. Sure, their backing vocals made a fine feather bed and lapping ocean from one song to the next, but even a shoeless diva knows how to hold a spotlight. Ngaiire, from New Guinea, was in constant danger of stealing it, even from the sidelines in her magnificent, voluminous party frock and headdress. Her Two Minds was a sinuous example of song craft that skirted soul tradition en route to some place more mysterious.

Equally commanding in her own way was Merenia, who described her lineage as Maori, Welsh and Romany, but sang her first tune in Spanish and danced a dazzling accompaniment – in platform heels – to emphasise her fluency.

Whirimako Black was an earthy voice of calm in English and Te Reo, minimally accompanied by the exceptionally adaptable Barefoot Band and, during the Ipanema-styled Wahine Whakairo, by a spectacular whirl of the poi pom-poms by Rika.

The Black Arm Band’s Emma Donovan hit the most poignant note with Ngarraanga, her gospel lament for stolen children and lost identity. But it was Darwin-born actor-singer-songwriter Ursula Yovich who let loose the unspoken rage with a soliloquy about personal dispossession: a note of naked confrontation in a journey of quiet deliberation. Long way, long way. By Michael Dwyer 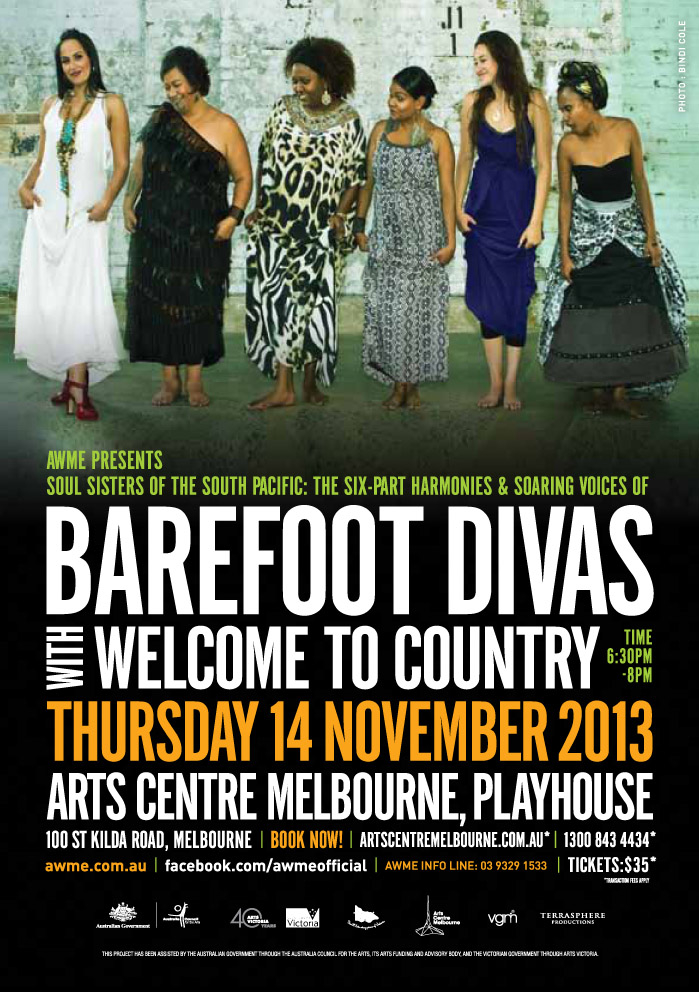